The ongoing saga of the G6 continues.
Thinking as the chassis is running, it might be a good idea to start building up the body, i couldn't Quite work out how the body was going to fit to the chassis. As the chassis is designed for other models it looks as if one has been left to ones own devices to make it fit.
The boiler sections are in Three pieces, top half of boiler including tank tops and Two off, of the bottom left and right section including the front splashers
I trial test fit didn't look that good. The top half was high at the front.......

.......and some rather nasty looking gaps at the joints.

This is going to need some work to get right, A 3mm gap at the front and neither side sitting square.

Closing the gap at the front just opened up the gaps on either side.

Lots of filling and sanding later, its beginning to look better.

We're sitting flat now with a perfectly round hole for the smok box door but still not good enough for me.

That's opened up the gap on the side. Lots more fettling of the castings i was finally happy and beginning to see something that i was happy with.

Well now, that looks a lot better.
I had to fill in the front with a sliver of White Metal.
I will have another go at this side, we still have a small gap, only shows up in the photo.
This took a lot of sanding, trying to be careful not to remove the banding detail in the process.
I know some people file them off completely as they can look rather overscale but decided that these don't look that bad.
The other thing that bothers me is the 'pitting' on the castings, this is unusual for SEF kit but this one is particularly bad. Guessing that air was trapped in the casting during the pour. This will need smoothing off before painting. She is going to be Black with Green lining and as we know, Black shows up everything.
Not sure what to use yet, the spray filler primer stuff or modeling filler sanded back, the later is probably my preferred option.
Posted by cparkstone at 14:14:00 No comments:

You don't hear from me for a while and then get Two posts in one night, well, trying to catch.

I have started one of South Eastern Finecast Adams G6 kits
http://www.sefinecast.co.uk/
I like there kits, they generally go together fairly well and the good about White Metal kits is they are nice and weighty.

As with the Terrier, the G6 being an 0-6-0 we have gone down the compensation/springing route again. If you have one of my Chassis Jigs you may want to look Here to see how i use it to install Hornblocks. Only 6 left. I have recently had some new pins made up, They have a 1mm x 3mm turned end instead of the tapered ends, this is the same size as Romford/Markits crankpins. These will be going on sale shortly or contact me through the blog.

Lets get back to the G6.
The Chassis is a bit of a Heinz 57 as it is made for other kits as well as the G6 but goes together well. You are left to your own devices as to attach body to chassis.
As usual i have gone to Chris at Highlevel for one of his LoLoader Gearboxes, a 1420 Mashima Motor and his Hornblocks.

Pictures say it all really


Just the tank sides and rear of the bunker fitted at the moment.
More to follow later in the week.
Thanks for Looking.
Posted by cparkstone at 00:13:00 No comments:

Sorry Guys.
One has been neglecting ones Blog, also just found out that Google have changed things slightly.
Where have i been, just busy, work, Exhibition, usual 'life' stuff.
Exton Quay was invited to Bournemouth Exhibition where it received some amazing comments, somewhat a bit overwhelming.
The layout behaved itself impeccable, was this down to me building the layout, i will put it down to a certain operator.
We met and made some new friends and hopefully encouraged others to have a go.
No excuses now for that old scenario 'i haven't got room for a layout' look what you can do in 5ft 4ins. 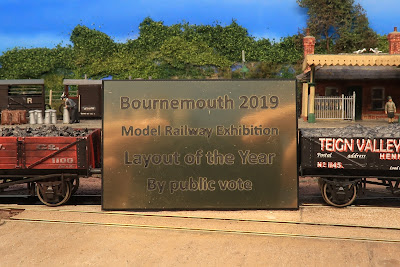 It won 'Layout of the year' award. Yeah!
We will be at
http://wimrail.org.uk/exhibitions/
Come and say Hello
Posted by cparkstone at 23:39:00 No comments:

We are at Bournemouth Exhibition next weekend.
Two new wagons have been entered into service for the event.
Both from the Wessex Wagons workshop, they have been fitted with 'Sprat & Winkles' 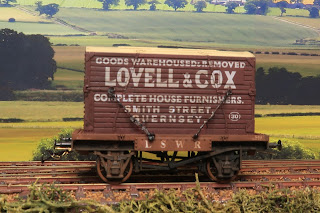 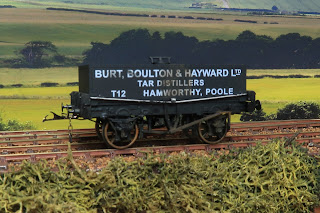