Final Part But....
...we have a problem. The crank thro is to much and the con rod hits the footplate.
What to do, i have know idea. 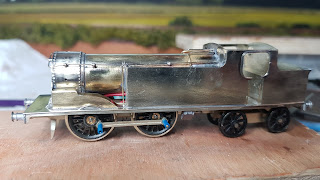 Still winning!
Not being happy at all about the buffer beams, took the plunge and took them off.
Lets start again...
.....layed the overlays on a piece of spare etch, sweated them together, cut them off, re drilled the buffer holes filed them up, resoldered to running plate, re soldered buffers and attach drawbar hook.
wow, doesn't that look so much better. 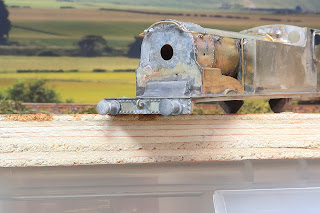 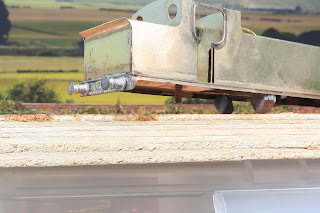 Oh god, we have fitted hand rails. I had to use all short handrail knobs from Alan Gibson otherwise we would of ended up with handrails going through the front cab windows. 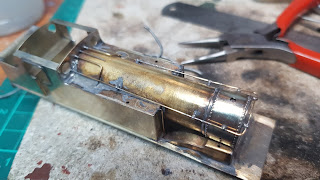 Of course some cleaning up to do. Also fitted the front casting, while i was at it thought it might be a good time to attach buffers which has now highlighted yet another problem...... 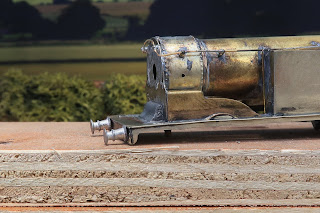 ....as you can see they don't fit flush. i was thinking from the start that the buffer beams look extremely thin, thinking they look more like overlays, perhaps it needs something more substantial behind them, this would push the buffer beam level with the front of the footplate and guess what, the buffers would sit flush. 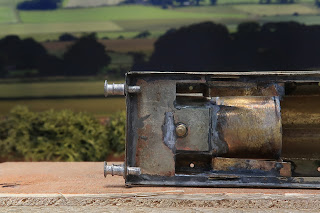 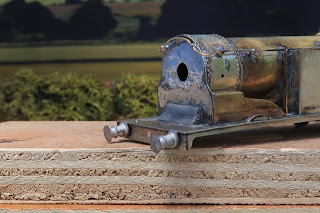 One big problem i am having with all this soldering and desoldering, the whole thing has begun to warp and no longer sits flat. 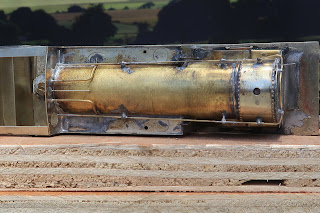 I also attached the sand boxes to the underside of the foot plate and now the chassis no longer fits between them. 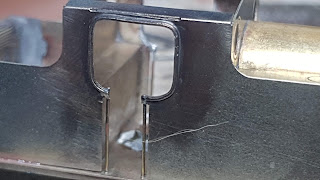 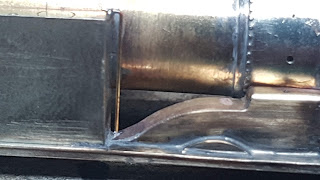 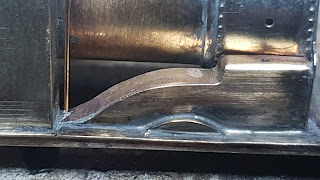 Exton Quay and a new edition.

What is it about brake vans,
just can't seem to get enough of em.
Its yet another Smallbrook Studios kit.
Diagramme 1541 10t Road brake van, Although in LSWR and SR days they were never referred to as this, so i have read unless you know different.
No 54736 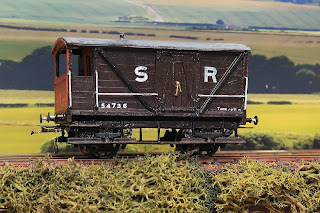 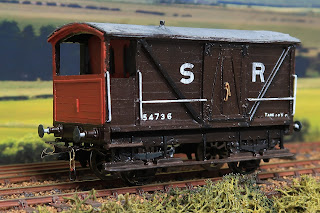 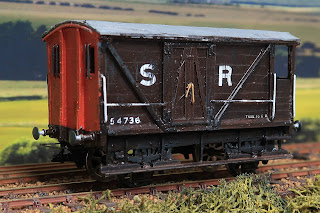 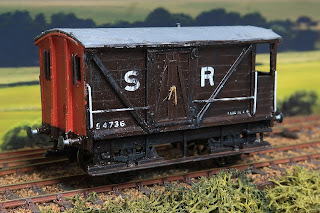 3mm scale Drummond M7
From
Worsley Works
I was asked by a good friend if i could build this for him. Can't be that difficult can it!
I had this for some time and thought it was about time i got on with it, it kept falling down the list.

There is a saying in the land of 3mm,
Its a builders scale, mate, have fun.
The Chassis and part of the body had already been built. Just a case of adding a few more bits, job done.

The first problem encountered was after making up the splashers, umm, err something ain't right.
To short and not deep enough. 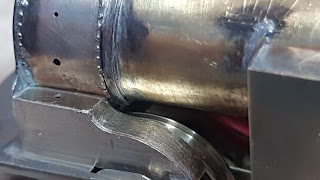 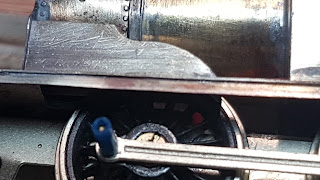 I sent about making some new ones... 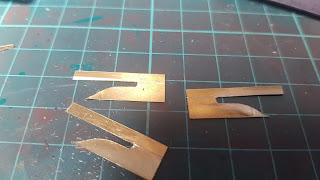 Looking pretty good to me. 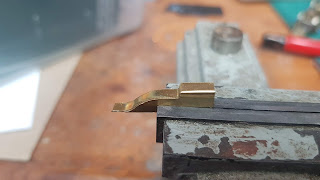 as can be seen from the photo it just don't look right does it guys. 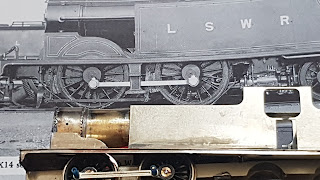 Now, that looks a lot better... 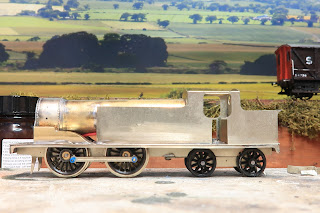 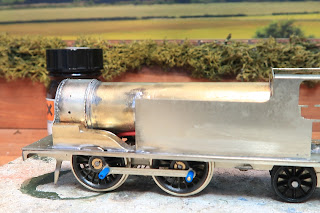 attach body to chassis and the whole thing shorted out. I have now discovered that the flange backs are touch the bottom of the smoke box behind the splashers. Also i have noticed another slight problem, looking at the picture below, the rear pony truck is sitting on the chassis between the axles so that will need filling away and there is very little metal above the leading bogie axle, will have to add some strengthening me thinks.
The Joys of 3mm scale. 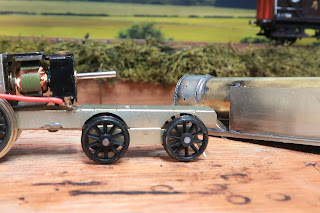 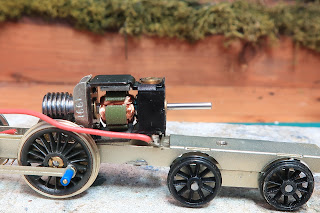 I'm not perfect by any means, i have painted it in the wrong livery.
I FORGOT completely FORGOT!

Mr Drummond has Two, yes Two liveries.
I know this. I do
So why did you paint your G6 in Drummond Loco Passenger Green.
Anyway,
I have used it as a test bed. Could i paint and line out the rather luxurious livery that Donald decided upon from the end of 1895?
Not all is lost as the G6 and 02s were very similar so the body could get put onto an 02 chassis.
Back to the big question.
Purple/Brown borders with White/Black/White lining on splashers, Tanks, most on the rear of bunker, front of cab. I cant find anything about rear of cab. Tops of tanks and slashers are black according to the Southern Style book by John Harvey, Part One, London and South Western Railway.
Some people think that tops of tanks and splashers are Purple/Brown, Whos right, I wasn't around in 1895 so cannot comment.
On what turned out to be a rather poor surface to paint on, I used Drummond Loco Green from Precision Paints sprayed through an airbrush, the Black was then brushed in, and then Two coats of GLOSS varnish was applied. 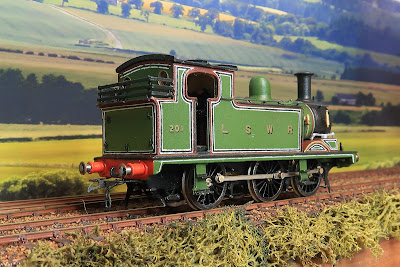 The body was then masked up in stages to apply the Purple/Brown borders using Two Humbrol colours mixed 50/50. 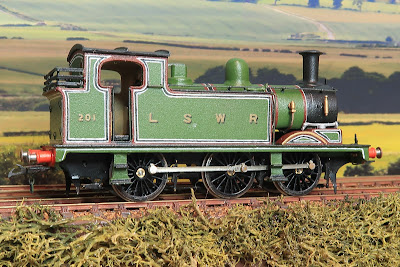 I also sprayed a small sheet of transfer paper using the Purple/Brown colour and using a Bow pen, marked some white lines out. Seal after with gloss varnish, these were then cut out and the transfer used for the Boier bands.
Digital cameras are cruel pieces of kit. 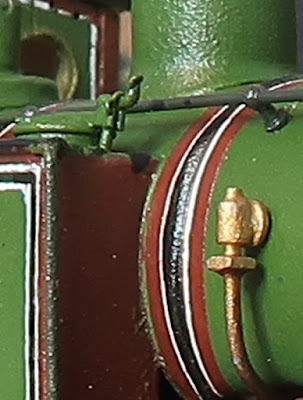 The rest was done using a Bow pen.
For a first attempt i am rather pleased with myself. Its not perfect but at least i've had a go and surely with practice it will only get better. 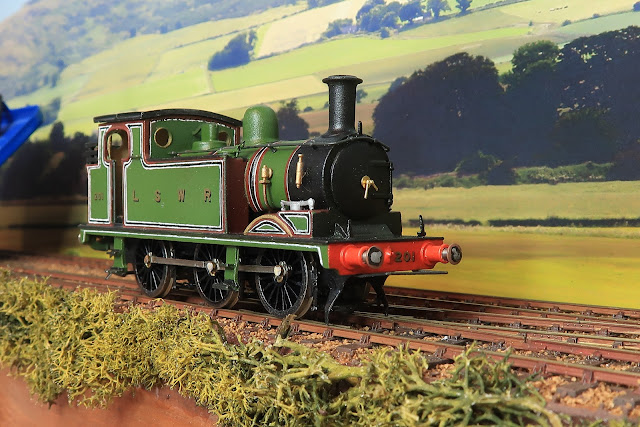 I have to give Ian Rathbone a mention, if you need to know anything about Painting and lining, his book is a one stop shop of any information. funnily enough its called
A Modellers Handbook of
Painting and Lining.
I cant recommend it enough.