Talking to Julian and Susan
what a friendly couple, at Railwells last weekend. They are Taff Vale models. Something caught my eye, some very small motor and gearboxes.
The motor/gearbox and shaft have a total length of 35mm. The motor and gearbox are 10mm x 12mm square, shaft length is 10mm with a 3mm diameter shaft. The gearbox is 150:1 so is extremely slow but linked to a suitable worm drive and gear wheel could be made to run faster or even slower.
I thought they might be ideal for operating doors, gates etc or probably ideal for a turntable.
I have know relation to them but thought were really good so check them out.

A trip to the Cinema.
The Regal Cinema in Fordingbridge originally opened in 1933, slap bang in the middle of Southern Railway days.
Days when everything seemed easier, everyone was happier, worked hard but stress free.
When Mice use to squeak and not click.
It closed in 1965, along with most other things it would seem.

Have a look at the website for dates and the films showing.

I felt honoured to be invited to the Cinema.
What i saw was a work of art.
The Cinema has been tastefully updated art deco style with pictures and advertising boards from the period.

The main facade looks splendid from the road with the Regal Cinema sign taking pride and place on the building.

It turned into a busy weekend, what with a trip to Railwells and a trip to the cinema, Will come to the cinema bit later.
Railwells is always well worth attending They always put on a really good show.
First port of call tho was Breakfast from the market stall. This consisted of Two of the biggest sausages you have ever seen in a roll. suitably refreshed,
on to the exhibition.
I'm not going to mention all the layouts, they are all very good.
This layout caught my eye, same era as Parkstone.
Hebble vale
Where have i seen these coal drops before?????? 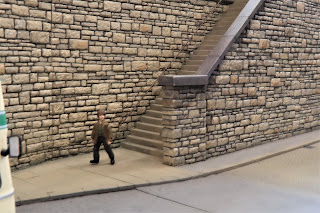 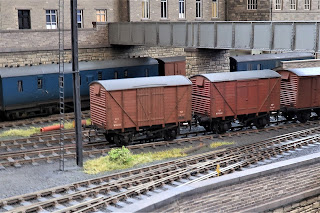 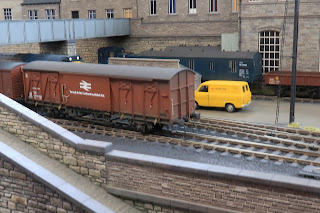 Seaton.
As Pine Road was based on Lyme Regis, Seaton was another layout that caught my eye. Well it would wouldn't it.
Serious shortage of Adams Radials tho, but the Beattie well tank in Lswr Pea green and the 02, truly stunning. 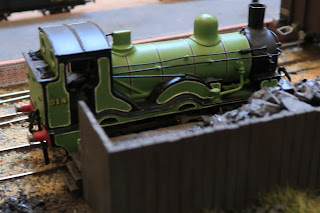 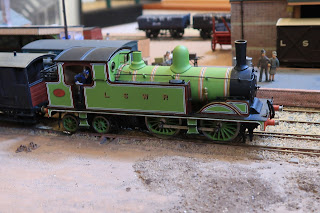 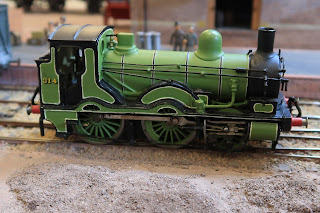 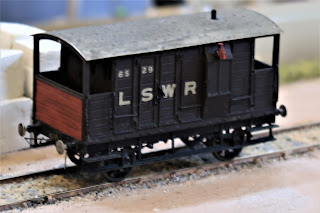 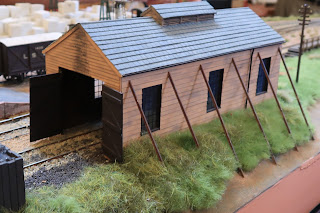 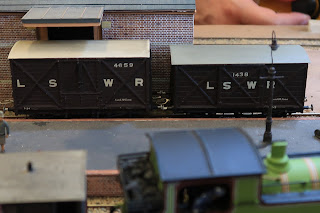 Sidmouth was there but struggled to get near it and Trerice by Iain rice again surrounded by people, still no definition on "Finescale"

The old method that i have used before is with a sleeper and solder the Two switch blade to it, doesn't really look that great to me 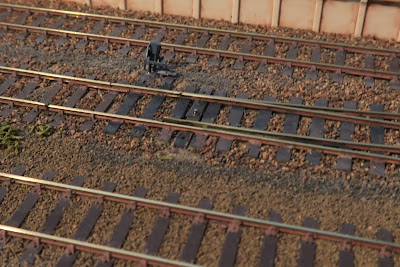 After picking at other people's ideas, I thought i would have a play and see what sort of balls up i could make of it.
I haven't actually soldered this to some switch blades yet, to try it out but the whole ensemble relies on a very small piece of double sided PCB. Should this delaminate we have a major problem on our hands. It could seriously go "Pete Tong"

The Point blades are soldered on to the outer Two pieces with enough left over to sit under the stock rails to stop the blades lifting.
The centre stretcher bar is attached over the Two pins after this so should the PCB delaminate it's not to much of an issue to replace.
Just make up a couple of spare ones.
Everything is 'above baseboard' so easily accessible.
After it's painted i think it would look a lot better than a sleeper sliding backwards and forwards.
As i am using Cobalt point motors there shouldn't be any great stresses on the Tie-bar.
The wire from the motor could either go up through the hole on one of the outer pieces or through, and replace one of the pins for the stretcher bar
The idea also gives some movement to the switch blades as if one thinks about it, they do actually switch across in a small arch.
Any ideas/comments on this approach would be greatly recieved.
Posted by cparkstone at 14:49:00 No comments:

Just a quick post today.
The cottage is nearly finished.

Can't show the other side, ran out of Corrugated sheets so still needs doing.
First job tomorrow, ring South eastern Finecast for more corrugated sheet.
Posted by cparkstone at 19:08:00 No comments:

Yes,
we have a backscene, well, something to put a backscene on anyway.
"Bend me, shape me, anyway you want me"
Amazing what you can do with a heat gun and some foam board
Of course, one needs to cut a hole
It comes in 2.4 metre sheets, bugger, its an inch and a bit short.
We shall overcome thee.
A low relief warehouse and a big tall chimney perhaps!
Posted by cparkstone at 14:43:00 No comments: