I thought i would do a video, heck, here goes.

One other thing that caught my eye over the weekend was,
Phil Parker's Saturday film club.

It brought back lots of happy memories with Mum & Dad
Posted by cparkstone at 13:23:00 No comments:

Just a quick post on the progress of the station building. 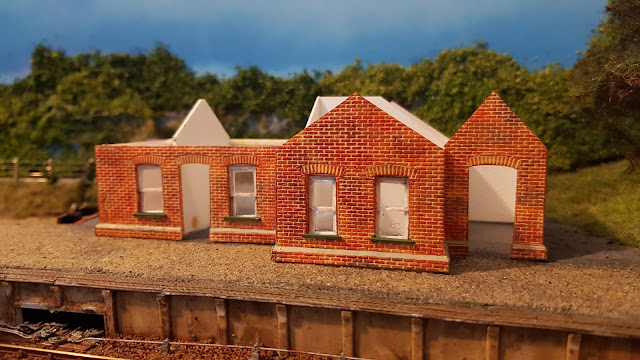 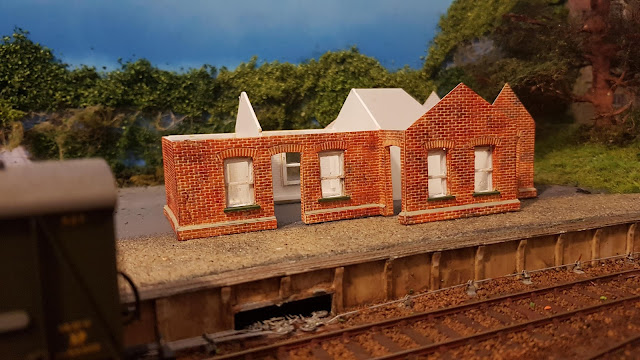 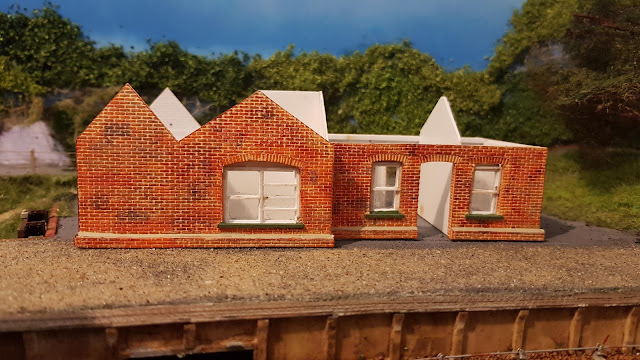 I have started the construction of a station building for Exton Quays.
What to build, was the first question. Obviously.
The second question was, what do you call a Bear with know ear?
Seriously!
Most Ex Lswr buildings seem to be of brick construction, some, where extremely elaborate affairs, with stone cornerstones, fancy roofs, stone window frames and huge chimney designs.
I thought this was perhaps rather overkill for Exton Quays.
Looking around for ideas, something small, interesting and fairly easy to construct.
I drive passed it most days so thinking, Breamore could fit the bill.
I took a few measurements, it didn't have to be exact as im not building a model of Breamore station, but at least i had a starting point in mind.
The walls have been made up with good old South Eastern finecast brick sheet and all windows and window openings have been made and cut out. Ready for the sad part, each window was made to fit each opening. Everest Glazing where extremely helpful for this.
One concern.
The roof looks like it might be slightly problematic. 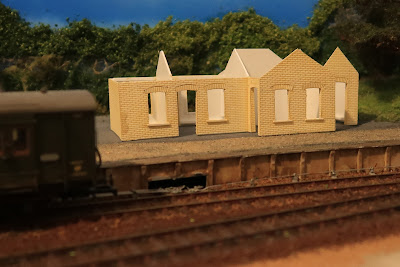 How the windows will fit. As SEF brick plastikard is so thin i thought it would be a good idea to set the windows back from the front face, of course it involves cutting 5mm strips of brick and turning 90 degree to create a window aperture. I think it looks very effective, better than cutting a hole and sticking a window on the inside. 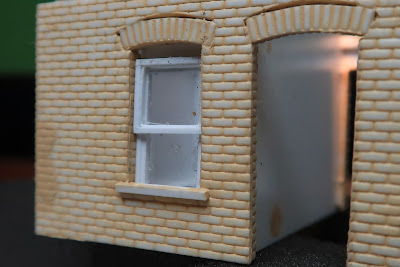 Windows made up from Evergreen plastic strip 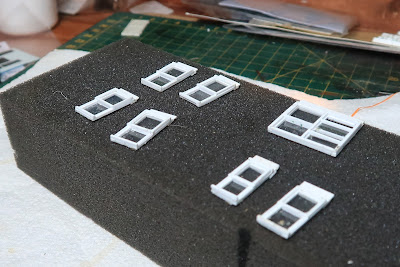 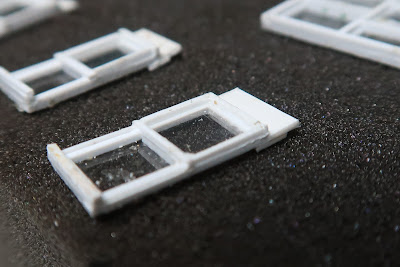 On a slightly different note.
My Defence
After all, i am only human.
I had a painting spree last weekend, as the airbrush was out, i grabbed anything that needed a coat of the shiny stuff.
This Roxey Mouldings carriage needed a coat of primer. it had been sat on the shelf for a while now, so that to had a new coat.
It wasn't till the next day when i took a look and realised that ONE hasn't finished ONES carriage.
LOOKOUT  DUCKS  ANYONE
REALLY!
REALLY!
It's what happens when you leave something, to go off on a tangent, and do something else, only to come back to it, and have forgotten what the hell it is you were trying to achieve in the first place. 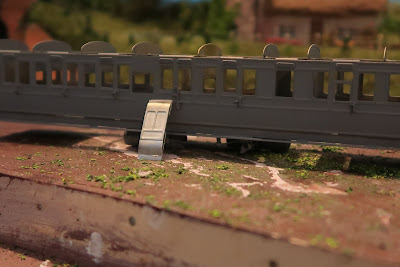 One other item i have been working on which will feature in a future post as i am sworn to secrecy for the moment, but lets just say, it involves a journey to the DARK SIDE
Posted by cparkstone at 18:45:00 No comments:

Its surprising how long things take to do, this small scene has taken a couple of weeks to achieve but, hoping you will agree, its all worth while.
With thanks to Severn models and his superb kits.
http://severnmodels.com/

Mr & Mrs Jenkins have been busy erecting there new shed and greenhouse.

As was talked about in a previous post, i was on the lookout for a greenhouse for Exton Quays.
They were ordered on New Years Day, i have to hand it to Severn Models as they arrived Wednesday morning, Quick service. The other thing i have to mention, is how well, they were packed, all kits in a separate envelope and taped to a piece of hardboard. These weren't going to get bent up.
Definitely worth a look . 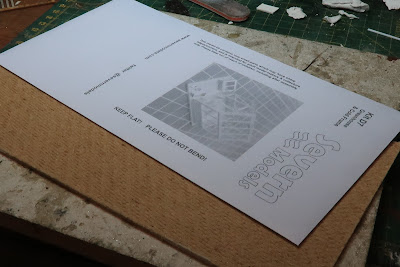 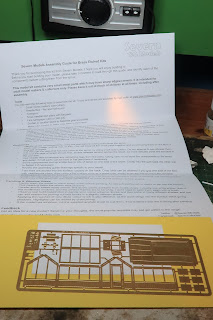 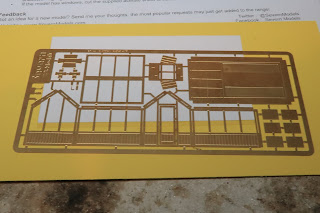 Look at the detail on the door look and handle. 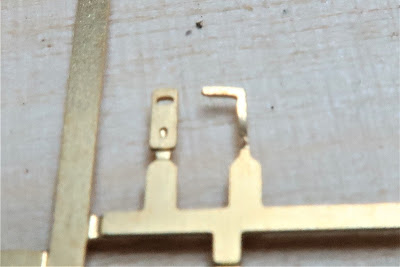 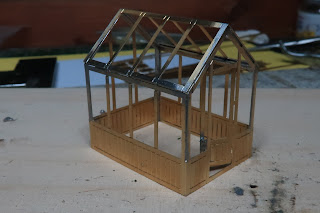 In the instructions, it does say about using glue but i have actually soldered these up. The greenhouse is in Two pieces, One piece for the sides and One for the roof. 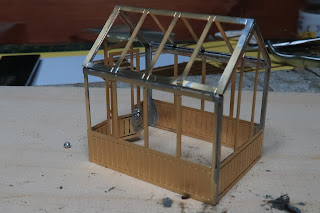 And the shed, or one of them, there are two in the kit, this one and one with a pitched roof. 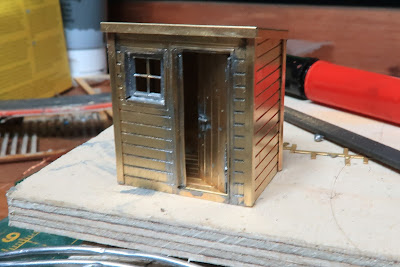 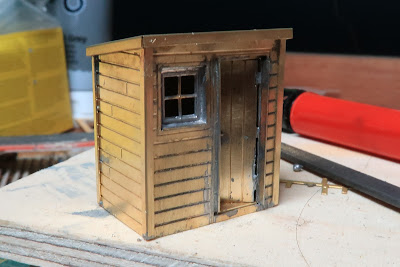 I shall post more pics when they have been painted.
Posted by cparkstone at 15:29:00 No comments:

Exton Quays an update from yesterday

A HAPPY NEW YEAR TO EVERYONE.

Further progress has been made on Mr & Mrs Jenkins house,we now have that sort of idyllic looking cottage feel, although, back in the day this would have been how it was struggling on, to make ends meet.
The left hand side has been planted with Runner beans, Rhubarb,Onions and potatoes all made by myself, non of your Noch stuff here. 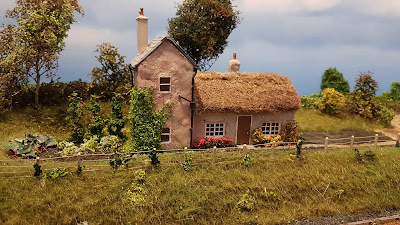 The right hand side will have a shed and greenhouse, sooo, doing what one does these days, i googled it to see what is available on the greenhouse front.
And what did i find you ask? Well, i found something that, i think looks stunning. Duly ordered and winging its way through the post.
http://severnmodels.com/
Have a look through this site, he has some really well detailed kits, including a stunning looking greenhouse and shed.There is also a section on preparing and painting, Andy is a man after my own heart and is a believer of the Citadel paints, sold at the
Wargames Workshops 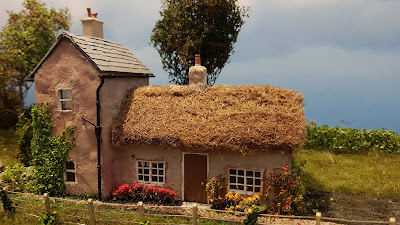 The next thing that i have been pondering on is the quay side. I had already decided to use the Anyscale models walling, but could it be painted up enough to look stunning, well, my own opinion admittedly, but i think it looks dam good. Its those Citadel paints again, you know. I also added some dark green scatter to represent seaweed along the high water line.
https://anyscalemodels.com/

An after and before shot, yes, should have done it the other way round.

I thought the steps were perhaps a bit steep but after looking at some old photos of quay sides, yes, some of them are bloody steep, so i decided to roll with it. 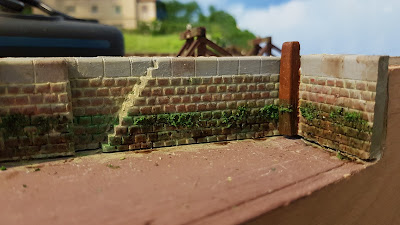 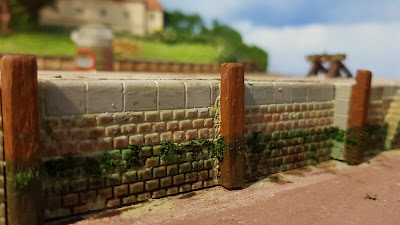 Just an overall shot i took the other day.
The blue foam at the front will be shaped in to some sort of land. This is a river dock not an ocean going port, the general public will be stood on the other side of the river, on land, looking in, not stood in the middle of the sea. 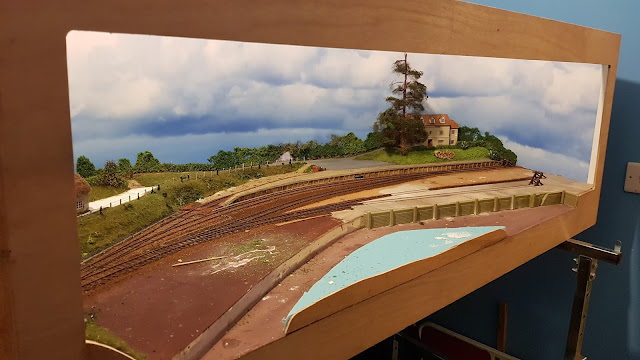