Nearly the end of 2016
Would just like to
wish everybody all the best
for
2017
Anyways down to other stuff
after
striping out the fiddle yard for Pine Road to make room for the extension, basically to give the trains a slightly longer run through the rolling hills of Dorset.

A stackable storage yard
Perhaps should have shopped around but these racking, shelving thingy's aren't what you would call cheap. £2.99 for one shelf bracket (so you need at least two obviously) and £5.99 for one upright.
Nearly 30 quid for this little lot. Well, it's done now.
Pine Road reconnected. 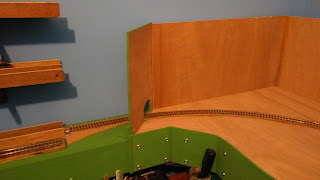 It's nice to have her up and running again.
I still haven't decided what to do on this section. To be honest their isn't that much room so am tempted to play it safe. A Level crossing and keepers house to hide the entrance to the storage yard, (can't put a bridge there, someone will plonk a bus on it) A couple more thatch cottages perhaps. At least she is running again.
26.5 Inches.
That's the radius of the curve...eeeek, alas my Two Adams Radials run around it quite happily.
The other Major problem is,
i can't find the Backscene that was used on Pine Road to continue it on. Stalemate

A trip to Parkstone

Hi all.
Hope we all had a great Christmas.
Thought i would have a wonder down to Parkstone station today just to see what was going on.
It turned out to be quite a busy day.

A Class 33 33117 Had just arrived with a goods train from Eastleigh
looking very clean.
The 03 No 03 045 had just come up the branch to help out with shunting duties in the very tight yard

Then at 2.00pm This arrived 37 222 to take a train back to Poole yard. It was then booked to take a steel train from Hamworthy to Newport.
It's a very misty day, you can just pick out the Purbeck hills in the background
A view of the goods train from the footbridge.
How different Osbourne road looks before all the flats were built
The waiting room on the down platform is looking very sorry for itself nowadays, I believe soon to be demolished and replaced with a "Bus Shelter" and probably painted red "really !"
Posted by cparkstone at 22:03:00 No comments:

Hornby's Peckett
Just superb
Detail Amazing
Running qualities Superb
Has to be one of the best little engines ever produced by Hornby
So, here they are
"Dodo"
and
"Manchester Ship Canal"

The cab detail is superb

Ok, i admit i had a little play with this photo


There's nothing else to say, but a superb model.

Could this be the start of a new project?
What a superb model, The detail is amazing and at a price that i don't mind paying.
No 6419 was originally shedded at Plymouth Laira and later at Yeovil Town. withdrawn 31/12/64 Making it the last one.

It's actually pretty good, It's well put together especially when you take it apart to get a chip inside, bit fiddly to say the least. For anyone that might need to know it's takes a 4 pin chip one of the old type from hornby part No X9659  some modification is needed to get the thing in there. It actually runs better on DCC than it did on DC.

I thought i would be allowed a free reign with this one as it's going to be used on the branch for Parkstone. Had the branch lasted another few years i wonder what might have been bought in to run down to the potteries. The original Peckett W4 (George Jennings) was always turned out immaculately so wanted something that looked good and had plenty of pulling power (coal and clay pipes are heavy). I thought the Sentinel would fit the bill.


Give here a high five.
"Thunderbirds are go"
Here she is No5


She's the only Hornby engine on the whole layout. 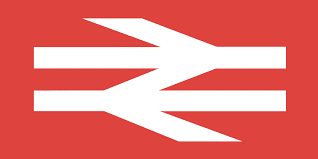 Well, here it is. A few bits and bobs to do but pretty much there.
Parkstone will have it's first debut at Bournemouth Model Railway Exhibition on,
Saturday 11th and Sunday 12th of February 2017
More info Here

The Backscene was done with the help of  This guy 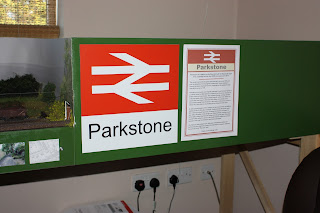 A Hornby Maunsell cattle truck Circa 1935

Hornby don't do a Maunsell SR perod cattle truck, Well they do now.

Taking the BR Maunsell version, we ended up with little baby.

A couple of shots before

And after
I used Railmatch SR Wagon Brown 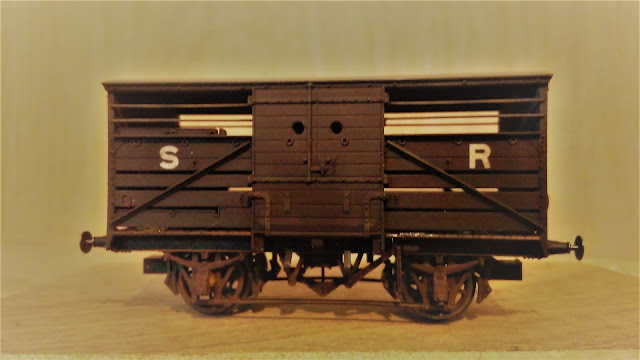 Beware these wagons are handed.
Slightly weathered and some bedding added.
Will let the rest of the photo's talk for themselves. 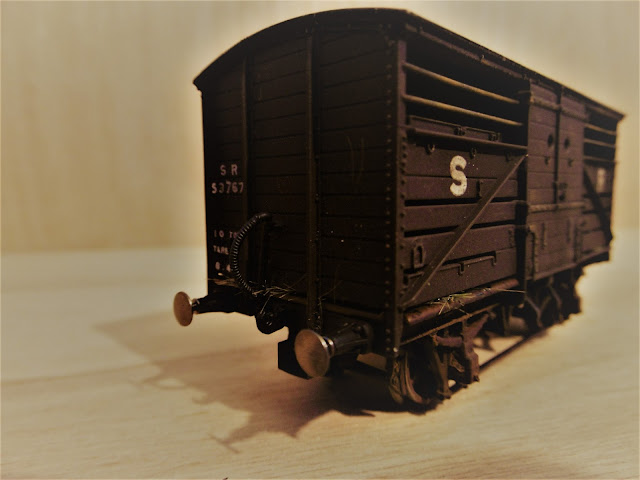 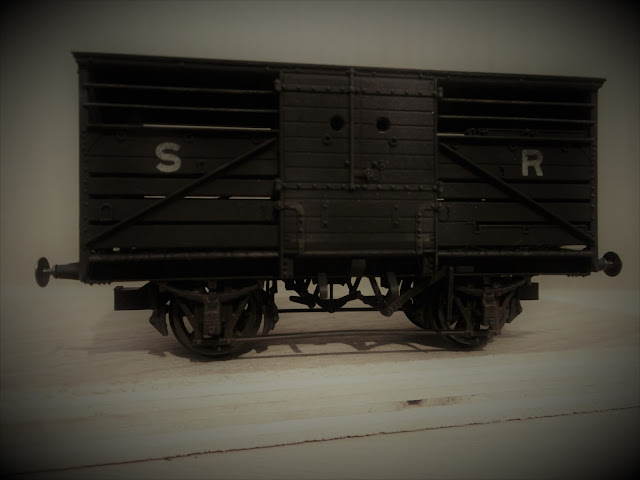 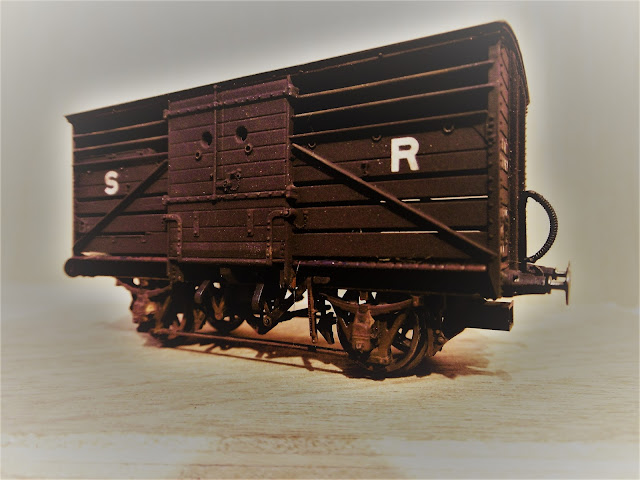 Excuse the title but i couldn't help myself.

An extra large photo for an extra large engine.
This is the new Dapol 0 gauge 08 shunter and superb she is.
This is one is Ho version. i forgot to ask it's origin. (lima perhaps) 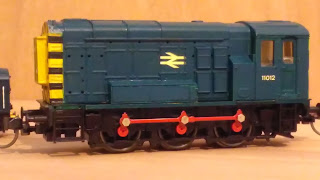 And here we have an N gauge version
Well, come on, it just had to be done didn't it.
So what do we call this,
A pride of shunter's
A shoal of shunter's
A gaggle of shunter's
If only a certain person had remembered to bring his 3mm scale version. "DoH" you know who you are!!!!! 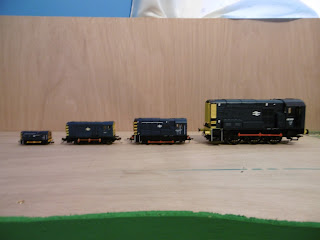 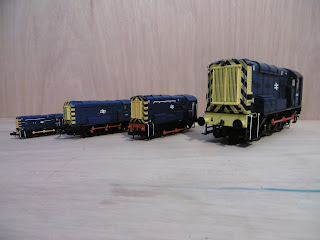 Class 47 in 3mm scale and a Thumper

A friend of mine is building these, a class 47 in 3mm scale. It is a white metal kit, not sure by whom but it's not looking bad. Placed against a Bachmann 47 to try to get the front profile right. 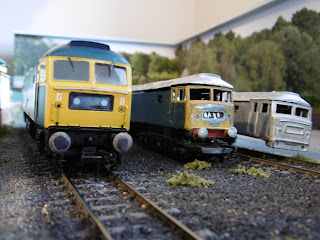 Lots of work still to be done but as they said in the day "were getting there"
The one in the middle has had the windows filed out and it's beginning to look the part. 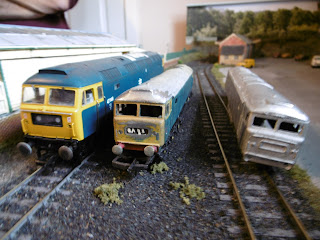 And also, soon to be a thumper
good work as well here.
This is true modelling in my book and he should be congratulated on the work done so far