Improving the running qualities of the 00 Works 0330 class.

From building my first loco kit some 9 years ago and now on number 14, you tend to set yourself some sort of  'standard' as to how you think things ought to run and look. Don't get me wrong, i'm no rivet counter but if you are going to build yourself an engine then it really should run well, if its a shunting engine then its not a lot of point having the thing running at 90 mph but flatly refuses to crawl along a length of track.

Back in February when  00 Works  announced that they were to release a Southern Class '0330' i couldn't resist, not quite right for my area but definitely fits in with my era. The old saying came in to play ' well its my layout' After a quick phone call to 00 works, the order was placed for a lined green, Black liveried one. Then a case of sitting back and eagerly awaiting its arrival.

Here you will find a link to a previous post i wrote of the exciting day of its arrival. you may want to click over, have a quick read and return here.

It's a cracking little model, rather expensive but hey, where am i going to find another. I believe some years ago 'Chivers' produced a kit for one but the chances of finding one now is probably going to be virtually impossible, and again what it cost to build the thing.

After reading through 00 Works website it's all handbuilt, screwed together a coreless motor and a one stage gearbox. Now, lets just read that last bit through again.

"A CORELESS MOTOR and a STAGE 1 GEARBOX

Remember what i was saying earlier about how you tend to set yourself standards about how you expect a loco to perform. Time for a rant, Somebody please tell me what all the fuss is about, with coreless motors, i just don't get it, rant over. Getting back on topic, a stage 1 gearbox. Alarm bells sort of rang or at least tinkled in ones head " not sure how this is going to run"

Bearing in mind that the loco arrived on the Thursday morning, a small running session that afternoon and by Friday afternoon its in bits. I can hear you all shouting at me saying "What the hell are you doing, just payed close to 300 quid for a loco and you've pulled it to bits, are you mad ?"

Yes, probably. Well, it didn't meet my running standards did it, as i say, whats the point of having a shunting engine that doesn't shunt. Now we are getting to the nitty gritty of what the post is supposed to be all about, that's if any of you are still reading this???

The massively big question was. Could i possibly fit a Highlevel Gearbox and Mashima motor in this loco? 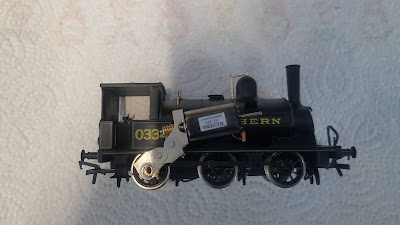 I have to say, that's looking promising.

With the chassis removed from its body and one frame removed to use as a template.......... 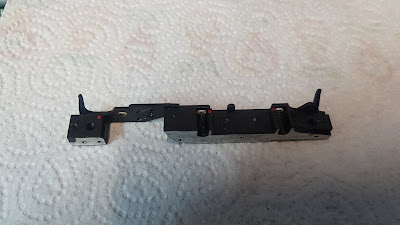 ..........i cut Two pieces of 0.40mm Nickel silver sheet  and temporarily soldered them together and then screwed these to one of the original frames. The problem here or should i say "the reason for making new frames" The chassis is to narrow to accept the Highlevel Gearbox, the original frames are also to thick to widen them out, you loose all your 'side play' that's if there was anything left to use, hence the reason for new side frames. 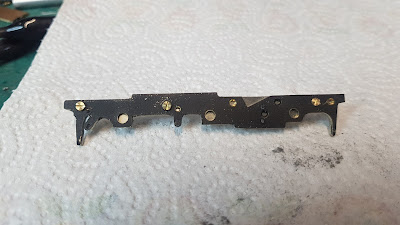 The Chassis, well at least one side of it, still screwed to the new frames after cutting them out. Using the rear axle hole to find the centre, i didn't trust the other Two holes but used the Connecting rods to set up and mark/centre punch and drill the other Two. I also elongated the centre axle hole just by a couple of thou with a length of sprung wire resting on the top of the axle to act as some sort of 'compensation' this keeps the centre axle firmly on the track. 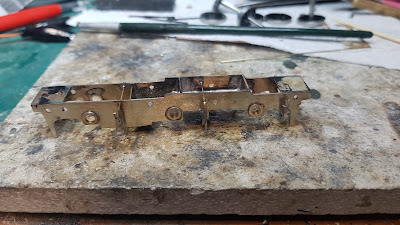 Cutting out some new spacers at 11.5mm wide and soldering the whole thing together, we have a new chassis...... 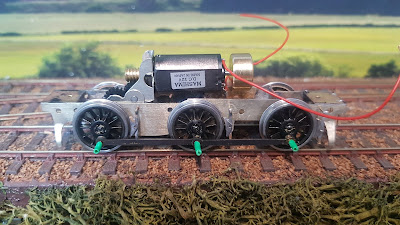 ......with wheels, motor and gearbox fitted, this is what we have.

Turning our attention as to how this was to fit inside the small body. The body is Two halves, this is going to present us with a problem as will become apparent later. 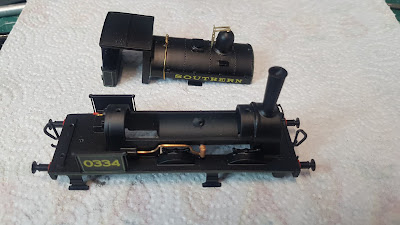 There is quite a decent size of 'hole' for the motor and gearbox to fit up through.

Only a small amount of material has to be removed from the underside of the cab floor to get it up inside. we also had to remove a portion of the 4 small tabs, Two at each end as the chassis is wider they are in the way. 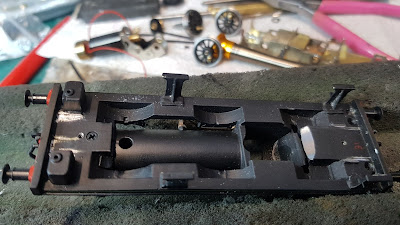 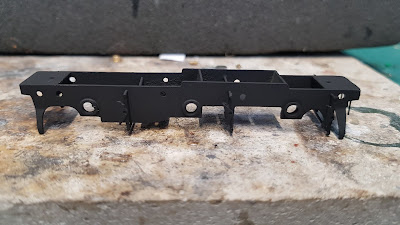 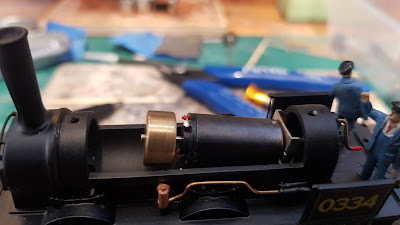 It all fits, i placed a couple of sticky pads under the motor for it to have something to sit on, also one under the saddleback, all this helps to 'clamp' the motor in place. also a good time to fit a couple of crew.
As you can see in the Photograph, there are Two holes left and right, this is the problem i hinted at earlier, they are for the Two screws to go through to hold the top saddleback and cab roof and rear section on. Obviously, we have a problem as the right hand one, the gearbox is in the way and the left hand side, the front axle is in the way.
My solution was to solder in Two captive nuts and use Two 12BA screws, down through the top of the saddleback. I know this is not ideal and may revisit this arrangement in due course, having Two screw heads on top of the saddleback is not ideal, i have countersunk them and fixed two blanking plugs so its not to conspicuous. 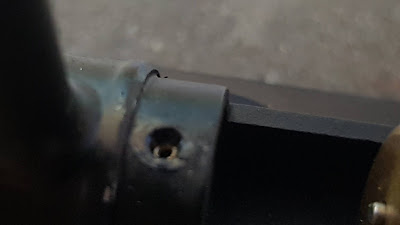 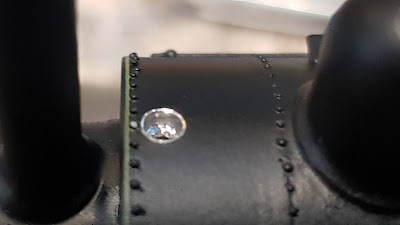 That's it. she is all back together and running beautiful. Complete with a crew and Sprat & Winkle couplings, she is ready for work.
She pulled her first train this friday so it was exactly a week for her to be re-chassis. 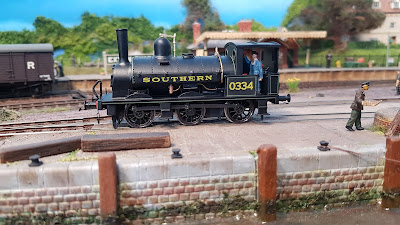 Some may say i was mad but me being me, whats the point of having something that your not entirely happy with. I could have just sent her back but this has nothing to do with 00 Works, there quality of engineering or production methods, its a perfectly fine model. This is no different than upgrading any Bachmann or Hornby model. This is entirely me and my own ideas and standards that suit me. i have to say, i rather enjoyed the build.
Do you want to see a video? ok, go on then.
Video link here
Posted by cparkstone at 19:00:00

It should be there. Having problems as the mobile site and desktop site are not working together hence the added link.