Running in board for Exton Quays

It would appear that lately i have spent more time waiting for paint/glue to dry than actually building anything, well, anything worth talking about, here.
I could have gone to Warley but spend far to much time on the M40 as it is anyway, stayed home and did something more constructive.

The second 02 is well on its way to completion, Chassis running, brake gear fitted. Just the body to paint (more waiting) oh and a LSWR carriage to paint. More on this later.
Am i rambling, probably.
Why am i writing today, i hear you all cry.
I found these on Scale Model Scenery Thought they looked good so ordered one (amongst some other bits).
And yes, they are good, a bit fiddly to paint and put together but, yes, there good. 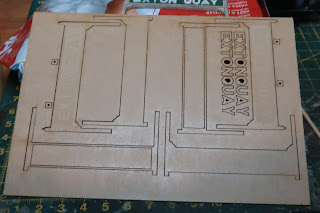 Put together and painted. Read the instruction, bugger me, i actually did. They are somewhat fragile. 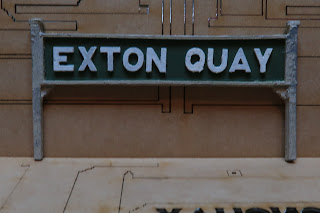 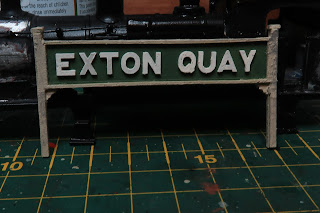 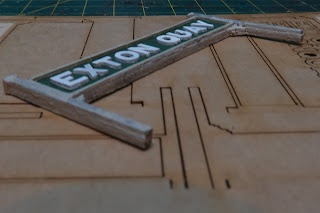 There we are, a couple of hours mostly waiting for Paint/glue to dry but am very pleased with the result.
Posted by cparkstone at 20:02:00 No comments:

It's been a while

As the title say's, it's been a while since one posted anything.
I feel that i should explain.
Not a great deal has been produced in the modelling sector lately. I,m not saying that i have been sat on me arse lately doing nothing, it's just one has been busy in other fields of our fabulous hobby.

Westfest took up time helping to organise the event, but what a fabulous day it turned out to be.

Also, we had an afternoon looking around Breamore station.

Then, we had a trip to Weymouth which involved a look around  Weymouth Exhibition  And a few beers, the night before, well, it would be impolite not to.  Two friends of mine were exhibiting a 009 layout that Steve had built called Hillbrow. Pictures of the layout can be seen Here. His blog is worth a butchers.

The Point rodding on Exton Quays, also took up a heck of a lot of time to get right. Making up the point rodding stools is just so fiddly. Certainly tests ones insanity.

We have also had our meet ups at the Avon Causeway hotel.

Then, we had Poole Model Railway exhibition, exhibiting PARKSTONE
A good day was had and it makes the whole project worth while when people realise what use to be at Parkstone station, now it's just flats where the old goods yard use to be. George Jennings always gets a good response when he appears, chuffing, with whistle blowing when he trundles up the branch.
Parkstone Goods, all set up and ready to go at Poole exhibition. yes, Keren, the curtains look great, Thanks.
Then, Saturday, just gone, a trip to West Byfleet for a 3mm Scale meet up. Always a good meet up with plenty of bits to buy.
This also led to a very interesting conversation with Geoff Halliwell who has come up with a 'thinking out of the box' idea for motor/gearbox drives. I think there will be more to follow on this subject. This is definitely, 'a watch this space' scenario.
There was also 'Cake' Phil Parker, you missed this one. Unfortunately, completely forgot to take a pic.
The Westfest expo made a small profit so we were able to make a donation to the 3mm society.
Here we are presenting the cheque. 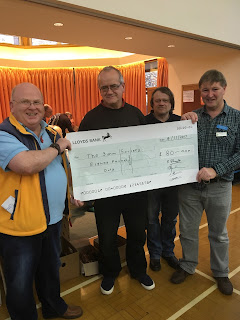 Thats it Folks
Posted by cparkstone at 11:24:00 No comments: